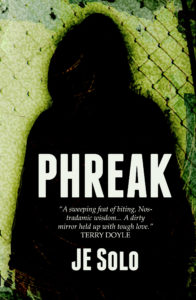 Digital copies of JE Solo’s Phreak are available now! The launch of the PRINT edition of Phreak will be announced in the coming weeks.

Buy now from House of Zolo on Gumroad – PDFs and EPUBs

Buy now from House of Zolo on Amazon.ca (Canada) – KINDLE

Buy now from House of Zolo on Amazon.com (USA) – KINDLE

The Kindle edition of Phreak is available worldwide on Amazon by searching the title.

In an alternate, near-future world where corrupt government and corporate interests rule the smallest details of Island life, an unusually sensitive child is born. Navigating a landscape of ecological devastation and botched genetic modification experiments, the child’s survival depends upon their heightened senses and the skills they learn at the knee of their life-hacking father. Will it be enough? As they cross the threshold of adulthood the collapse of Island society draws close and they must act in order to protect what they love.

A richly detailed and compelling first novel, Solo deftly layers satire and social commentary to create a powerful story of resilience and survival.

“From mind experiments and radio-signal hacking to illegal fish-weed trading and radical plant-based activism, Phreak is a poignant and captivating snapshot of our not-so-distant future. Beautiful in its devastation, a whimsical story of injustice, hope, and the fight for connection in a disconnected world. An important and timely novel. JE Solo is a visionary.” Tracey Waddleton, Author of Send More Tourists, the Last Ones Were Delicious

“This book hacked my mind and modified the way I see my city. A sweeping, crusty feat of biting, Nostradamic wisdom. An imaginative force. A dirty mirror held up with tough love. A warning.” Terry Doyle, Author of Dig (2019 Breakwater Books)

“Phreak often worked against my narrative expectations with its fragmented, time-jumping, and vignette-style approach, and in the process delivered a singular character whose clear and deeply felt recollections warn us how close we are to delivering a similarly bleak future to the next generation. You’ll want to get your hands on this novel as soon as possible.”
Richard Leis, Author

“Phreak is an urgent, evocative novel. It’s a treatise on the dangers of our capitalist, resource-driven economy and a warning of what our future could be if we don’t take action. Phreak is a call to resistance and a reminder that individuals can fight against corrupt systems. The world in this book is imagined but shockingly familiar. St. John’s and Newfoundland are like a second protagonist, with a voice and character that shines through the pages. JE Solo has sent us a warning in this novel, but has done it with humour and heart. This book is a quick witted, word-playing journey that gives us what we all need right now: hope.”
Susie Taylor, Author or Even Weirder Than Before (2019 Breakwater Books)

“With an imagination akin to Katherine Dunn’s Geek Love, an origami-like command of folding and unfolding reality, and the social and ecological warnings of Kotzwinkle and Atwood, JE delivers their most personal work to date. Their lifelong themes of the selfish and short-sighted perils of Earth’s primary predator lead us through a society that has all but surrendered to its controllers. But it also introduces a protagonist whose families – by blood or by fire – not only dare to retain their humanity but in most cases go down fighting to take it back.  As we currently grapple with nature’s responses to our destructive systems and ideologies, this novel is timely and possibly sadly prescient. But as Phreak’s character Nunce states, “This is resistance. The most beautiful word in the language..”
Jodee Richardson

“Phreak is a masterfully written post-dystopian tale — a “what if”, multi-lessoned story that, once injected under the reader’s skin, stays in one’s system long after the book has ended. A brilliantly crafted first novel by Fresh Fish finalist JE Solo.”
Poet, E.B. Reid

J. E. Solo is an award winning writer, multi-disciplinary performance artist, and composer whose artistic practice is focussed on creating universes, building worlds and merging the real with the virtual. Solo’s work explores humanity’s tenuous connection to nature and juxtaposes the evolution of modern technology against the fragility of living things.

AVAILABLE NOW as PAPERBACK, Kindle and EPUB. Search “House of Zolo”on Amazon or follow one of these links: 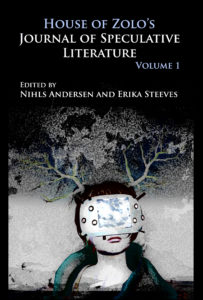 Buy now from House of Zolo on Gumroad – EPUBs and PDFs

The Kindle and Paperback editions of the HOZ Journal of Speculative Literature Volume 1 are available worldwide on Amazon by searching the title.

These are just few of the many ideas explored in this exciting new collection from the House of Zolo. Writers and poets from around the world conjure fractured dimensions, cast dark nightmares and offer alternatives to the apocalypse as they navigate to the very edges of time and back. Delving into themes of post-humanity, future-shock, and the consequences of climate change, these short stories and poems fearlessly explore what it means to be human. Alternately dark and hopeful, heartbreaking and humorous, this volume contains stories and poems to spark the imagination and inspire new perspectives on the future.