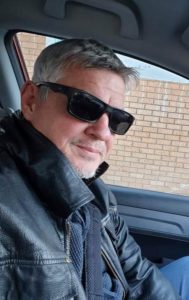 Steve Dillon is a British/Australian author who has also lived and loved on Vancouver Island for almost a year, and wishes it could have been longer. He now lives in Tasmania. Over the past few years, Steve has served up a recipe of more than 70 short stories and many poems, mostly of a dark flavour sprinkled with supernatural and psychological elements, and topped with a dash of surrealism at times. He also paints, edits, and has published work by Ramsey Campbell, Clive Barker, Christopher Golden, and a host of established and emerging writers. Steve is usually cooking something up on social media:

Steve is a contributing author to the House of Zolo’s Journal of Speculative Literature – Volume 1 with the short story “Panopticon.”