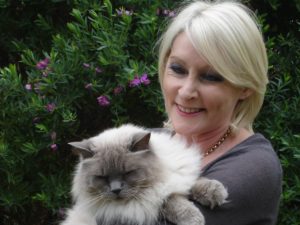 Jenny Blackford lives in Newcastle, Australia. Her poems and stories have appeared in Cosmos, Asimov’s Science Fiction, The Pedestal Magazine and more.  Her poetry prizes include first place in the Thunderbolt Prize for Crime Poetry 2017, the Connemara Mussel Festival Poetry Competition 2016 and the Humorous Verse section of the Henry Lawson Awards in 2014 and 2017. Sydney press Pitt Street Poetry published an illustrated pamphlet of her cat poems, The Duties of a Cat, in 2013, and her first full-length book of poetry, The Loyalty of Chickens, in 2017. She won two prizes in the 2016 Sisters in Crime Australia Scarlet Stiletto Awards for a murder mystery set in classical Delphi, with water nymphs. Eagle Books published her middle-grade fantasy adventure novel The Girl in the Mirror in October 2019.

Jenny is a contributing author to the House of Zolo’s Journal of Speculative Literature – Volume 1  with the poems “Silver-Clean” and “No birdcage breast” and the short story “Velvet Revolution.”