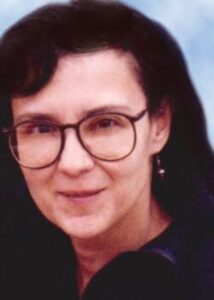 M. Grace Melucci’s professional life has followed an eclectic path. She started off selling cameras, and later worked in the printing business as a typesetter and graphic artist. She spent a few years as an independent fashion designer in NYC dressing punks, having fashion shows in night clubs, and doing some major vending at the Jacob Javits Center. Later she landed in the newspaper business, selling advertising space. Currently she works as a writer of tarot card interpretation, and as a professional psychic. Her book reviews appear on the Aeclectic Tarot web forum. Currently she is looking for an agent for her metaphysical novel Dreaming Out Loud, which is loosely, but respectfully, based on the theories of Carl Jung. She keeps a low profile on the web because she believes the internet is haunted.

M. Grace is a contributing author to the House of Zolo’s Journal of Speculative Literature, Volume 2 with the short story “Do the Young Girls Still Play Patty-cake in the Schoolyards of Zolfaire?”