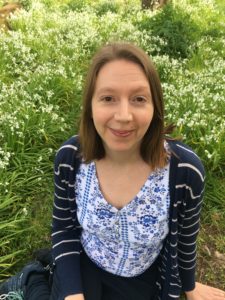 Lucy Stone is a writer of character-driven fantasy – which means she not only uses her characters to explore the intricate fantasy worlds she creates, she also uses those intricate fantasy worlds to explore her characters. She has even gone so far as to create landscapes that symbolize her protagonists’ souls/personalities/mental states. She is never happier than when writing dialogue between two people who exasperate each other.

Her biggest influences are Terry Pratchett, Angela Carter, Naomi Novik, Philip Pullman, J. K. Rowling, and Oscar Wilde. She studied at Oxford, with which she has a love-hate relationship, and now works on a dictionary, which has a love-hate relationship with her. She lives in Banbury with her partner and her four-year-old son. When not devouring their books, she can be found online.

Website: www.lucystonewriter.com
Twitter @LucyStoneWriter.
Lucy is a contributing author to the House of Zolo’s Journal of Speculative Literature – Volume 1 with the short story “Camp Cupid.”