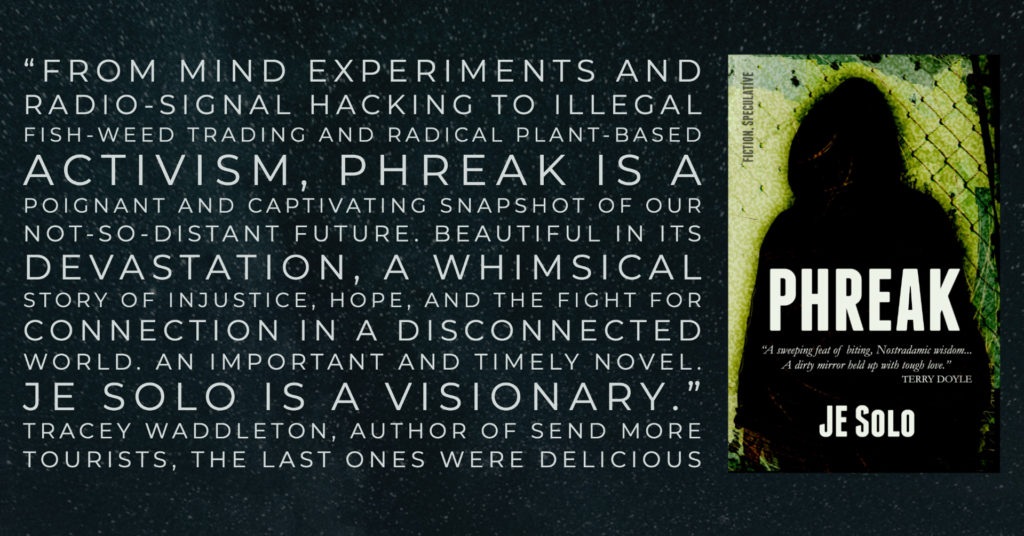 JE Solo‘s debut novel, Phreak, launched in digital formats on May 1, 2020. Here’s what readers are saying:

“Phreak is an urgent, evocative novel. It’s a treatise on the dangers of our capitalist, resource-driven economy and a warning of what our future could be if we don’t take action. Phreak is a call to resistance and a reminder that individuals can fight against corrupt systems. The world in this book is imagined but shockingly familiar. St. John’s and Newfoundland are like a second protagonist, with a voice and character that shines through the pages. JE Solo has sent us a warning in this novel, but has done it with humour and heart. This book is a quick-witted, word-playing journey that gives us what we all need right now: hope.”
Susie Taylor, Author of Even Weirder Than Before

“With an imagination akin to Katherine Dunn’s Geek Love, an origami-like command of folding and unfolding reality, and the social and ecological warnings of Kotzwinkle and Atwood, JE delivers their most personal work to date. Their lifelong themes of the selfish and short-sighted perils of Earth’s primary predator lead us through a society that has all but surrendered to its controllers. But it also introduces a protagonist whose families – by blood or by fire – not only dare to retain their humanity but in most cases go down fighting to take it back. As we currently grapple with nature’s responses to our destructive systems and ideologies, this novel is timely and possibly sadly prescient. But as Phreak’s character Nunce states, “This is resistance. The most beautiful word in the language..”
Jodee Richardson, Playwright and Musician.