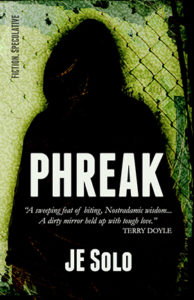 We are thrilled to announce that the Digital copies of JE Solo’s debut novel Phreak are available now! The launch of the PRINT edition of Phreak will be announced in the coming weeks.

Buy now from House of Zolo on Gumroad – PDFs and EPUBs

Buy now from House of Zolo on Amazon.ca (Canada) – KINDLE

Buy now from House of Zolo on Amazon.com (USA) – KINDLE

The Kindle edition of Phreak is available worldwide on Amazon by searching the title.

ABOUT PHREAK – In an alternate, near-future world where corrupt government and corporate interests rule the smallest details of Island life, an unusually sensitive child is born. Navigating a landscape of ecological devastation and botched genetic modification experiments, the child’s survival depends upon their heightened senses and the skills they learn at the knee of their life-hacking father. Will it be enough? As they cross the threshold of adulthood the collapse of Island society draws close and they must act in order to protect what they love. A richly detailed and compelling first novel, Solo deftly layers satire and social commentary to create a powerful story of resilience and survival.

“Phreak is an urgent, evocative novel. It’s a treatise on the dangers of our capitalist, resource-driven economy and a warning of what our future could be if we don’t take action. Phreak is a call to resistance and a reminder that individuals can fight against corrupt systems. The world in this book is imagined but shockingly familiar. St. John’s and Newfoundland are like a second protagonist, with a voice and character that shines through the pages. JE Solo has sent us a warning in this novel, but has done it with humour and heart. This book is a quick witted, word-playing journey that gives us what we all need right now: hope.”
Susie Taylor, Author of Even Weirder Than Before (2019 Breakwater Books)

“With an imagination akin to Katherine Dunn’s Geek Love, an origami-like command of folding and unfolding reality, and the social and ecological warnings of Kotzwinkle and Atwood, JE delivers their most personal work to date. Their lifelong themes of the selfish and short-sighted perils of Earth’s primary predator lead us through a society that has all but surrendered to its controllers. But it also introduces a protagonist whose families – by blood or by fire – not only dare to retain their humanity but in most cases go down fighting to take it back.  As we currently grapple with nature’s responses to our destructive systems and ideologies, this novel is timely and possibly sadly prescient. But as Phreak’s character Nunce states, “This is resistance. The most beautiful word in the language..”
Jodee Richardson, Playwright and Musician. 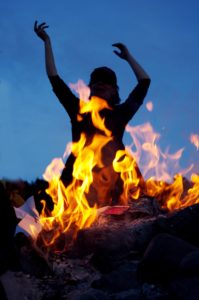 J. E. Solo is an award winning writer, multi-disciplinary performance artist, and composer whose artistic practice is focussed on creating universes, building worlds and merging the real with the virtual. Solo’s work explores humanity’s tenuous connection to nature and juxtaposes the evolution of modern technology against the fragility of living things. JE’s recent accolades include an East Coast Music Award; a Media Arts Prize and a Dramatic Script Prize from the NL Arts and Letters Awards; and the Linda Joy Award from the Atlantic Film Festival for the screenplay the machine. JE Solo’s articles and essays have been published by the Newfoundland Quarterly, TOFU Magazine, Reverb Magazine, Canadian Theatre Review, and Switch Magazine, among others. Phreak is JE’s first novel and was short-listed for the Writer’s Alliance of Newfoundland and Labrador’s 2017 Fresh Fish Award.