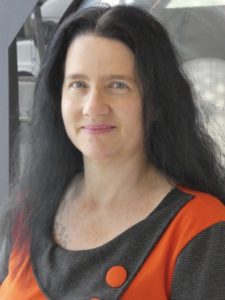 Toronto author and editor L.X. Beckett frittered their misbegotten youth working as an actor and theatre technician in Southern Alberta before deciding to make a shift into writing science fiction. Their first novella, Freezing Rain, a Chance of Falling, appeared in the July/August issue of the Magazine of Fantasy and Science Fiction in 2018, and takes place in the same universe as their 2019 novel Gamechanger. Lex identifies as feminist, lesbian, genderqueer, married, and Slytherin. They are on Twitter as LXBeckett and have a web site, the Lexicon, at http://lxbeckett.com/.

L.X. is a contributing author to the House of Zolo’s Journal of Speculative Literature – Volume 1 with the poem “Starring you in the Role of the Fourth Rider.”

What attracts you to speculative realms?
Science fiction and fantasy are so exciting to write and read. The imagination that goes into a piece like Tamsyn Muir’s Gideon the Ninth or Rebecca Roanhorse’s Trail of Lightning is so delicious and thrilling… the books have the potential to surprise you with anything, because all the possibilities are open.

You have worked in many mediums, from theatre to poetry – what was the impetus to shift from the live stage to the written word, and then from fiction to poetry?
I grew up in a theatre environment, but had been writing and submitting stories to short fiction markets throughout my teens. Even when I was working as an actor and a stage technician, I knew that writing novels was something I had to do… so quickly enough, I got out of theatre and into writing instead.

Poetry, on the other hand, is something I took up when I was recently doing an MFA at the UBC Creative Writing program. The program is an avowedly multi-genre degree, and so everyone who enters it is obliged to try new things. I enjoyed it immensely, and was encouraged by my instructor to work toward publishing some of my poems… and so here I am!

Do you have an opinion on the publishing world of today, in particular as a Canadian author and as an author of speculative literature?
Everything in publishing—like everything in the world—feels a bit tenuous and up in the air right now because of the pandemic. But I think there are some exciting things happening in publishing, particularly conversations about inclusivity and how to broaden the scope of what we write so that it represents more people in ways that bring good into the world rather than harm.

Has your writing practice or subject matter changed during the pandemic?
My practice has definitely changed as I have been, for over 20 years, a dedicated café writer. Right now we’re under a very strict lockdown in Toronto, where I am, so my ‘café’ is the kitchen table in my own house and I’m supplying my own coffee and using headsets to create some semblance of ambience. The only thing unchanged is the time of day when I write—first thing in the morning, or as close to it as possible.

As for subject matter… by chance I was writing a series of novellas as the lockdown began, in March, that were about a very unstable period in the middle of the 21st century, called the Clawback, characterized by pandemics, climate change, international and economic instability and rising violence in the U.S. They were meant to be a bit more futuristic, but, you know… 2020. These stories all tie into the world I created in my 2019 novel Gamechanger; I got three of them done in the spring and then I was ready to take a break, not surprisingly, from the turmoil. I’m now experimenting with a space opera.

All of those novelettes are sold now. One, “The Immolation of Kev Magee,” is out in Clarkesworld. (http://clarkesworldmagazine.com/beckett_08_20/) Two more are coming in Asimov’s Science Fiction and the Magazine of Fantasy and Science Fiction.

What projects are you working on these days? Please feel free to share links, etc.
My next novel, Dealbreaker, is a sequel to Gamechanger and it will be out on January 26, 2021. It’s available for preorder and all the links for all the bookstores, along with the beautiful beautiful cover, can be found on my site. http://www.lxbeckett.com/dealbreaker/

Dealbreaker picks up the story of Frankie Barnes, who was just a kid during Gamechanger. She’s now grown up, in love with the woman of her dreams, and working as a test pilot in Earth’s highly dangerous FTL development program… and she’s also just about the only person in the program who thinks it might be being sabotaged. Frankie loves her family and doesn’t want them to worry about her, and she doesn’t want to die or be hurt. But she just can’t seem to help herself when it comes to trying to prove the FTL program is in jeopardy—and that bad actors within the project are trying to collapse the solar system’s economy so they can get political power for themselves. Essentially she’s in a race to either be at the heart of a fatal spaceship crash or get murdered by the saboteurs nobody believes are a real thing.
L.X. Beckett