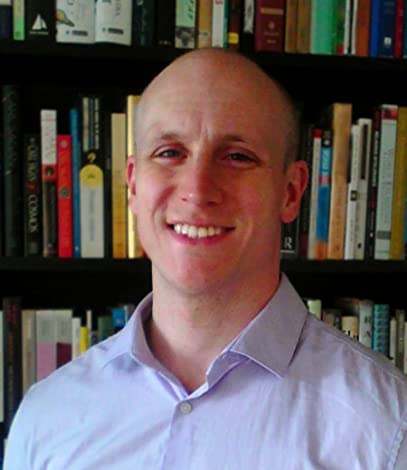 David F. Shultz writes speculative fiction from Toronto, Canada, where he is lead editor at TDotSpec and Speculative North. His over-sixty published works are featured or forthcoming through publishers such as Diabolical Plots, Third Flatiron, and Abyss & Apex. Twitter: @davidfshultz davidfshultz.com

David is a contributing author to the House of Zolo’s Journal of Speculative Literature, Volume 2 with the short story “Terminal Velocity.” David was kind enough to give House of Zolo this in-depth interview for our Author Feature series.

1. What inspires or excites you about writing speculative fiction?
I think speculative fiction is the most fun of all the genres, but it also has the greatest expressive potential. It can do anything that other genres can do, but with the added element of imagined worlds.

Most of the world’s literature throughout history has been “speculative” in the broadest sense, if we include lore and mythology under that disputed label. People have always told stories about spirits, gods, magic, and monsters. The realist movement was a blip in human history. And even realist writers sometimes can’t help but reach for speculative language. T.S. Eliot, for example, in the “The Love Song of J. Alfred Prufrock,” turns to mermaids for the climax; in Sylvia Plath’s “Daddy,” the climax uses vampire imagery. Both of these realist writers needed more powerful expressive tools than mundane images allowed, so they reached for speculative language. These symbols speak in ways that ordinary language can’t. Speculative writers specialize in these powerful symbols—either inventing new ones, or exploring existing ones more fully.

Speculative fiction sometimes gets looked down on by ivory tower literature academics, probably in part because of its popular appeal, and in part because of institutional momentum. But this is nothing new. The intellectual establishment looked down on early novels when they rose to prominence in the 18th century—only poetry and plays were considered properly “literary,” with Shakespeare being the standard-bearer for literary achievement. Before that, Shakespeare was looked down on, dismissed as junk for the masses. For whatever reason, the experts seem to fall behind on the most important movements. The same thing is happening now with speculative fiction.

Speculative fiction is more challenging to readers because it shares all the same elements as any other genre, with the added element of world-building. A reader of speculative fiction needs to track more than characters, themes, emotions, plot, and so on—they also need to learn and understand the rules of the new world they are occupying. They are expected to remember, reason about, and extrapolate from invented premises, and understand how these relate to the characters and the broader narrative. But there is no reason why speculative literature can’t do, in principle, everything that realist literature can do, and more. There are plenty of examples, but Ursula K. Le Guin’s The Left Hand of Darkness is a particularly good one.

2. In your story “Terminal Velocity,” the planet is used as the course for a high-powered race—what inspired this idea?
The story is largely an excuse to have SF action sequences that I thought were cool. I liked the idea of supersonic frictionless pods flying over recognizable geographic areas. I actually used Google Earth to map out sections of the race, get accurate distances, angles, and geographic features, and to get ideas for descriptive details.

Of course, the story is not only about a high-speed race—although my main motivation was the fun, SF action, I didn’t want it to be just about that. It’s also about news and entertainment media, corporate exploitation of the environment, and individual rebellion against perceived sources of tyranny. I think these themes are served well by using the entire globe as the arena for the contest. But these ideas are in the background—the story foregrounds the action of the race.

3. Do you have any thoughts on how future technology might impact media and/or gaming?
I guess it depends on how far we make it as a species. I have my doubts that our future will be bright. Certainly we’re in for a rough time. But assuming we can avoid a Mad Max future, and find ourselves somewhere between a cyberpunk dystopia and a Star Trek utopia, then future technology will change media in multiple and profound ways, some of which will be difficult to imagine until they start happening.

I guess it makes sense to focus on the things that we can see coming, and maybe narrow it by looking at the intersection of gaming and storytelling.

As tools for game development improve, it becomes easier for individuals to use video games as expressive outlets. An indie-developer working in their spare time, with no training, a low-end machine, and free software, can create compelling and commercially competitive games. I am very excited to see the continued exploration of the storytelling and expressive potential of video games, and in particular indie video games, as advancing technology opens up the medium to more creators.

The term “game” problematically connotes that these are idle, time-wasting activities, which is probably true for a lot of games, but certainly not for all of them. Video games are, in my opinion, a critical form of literature, and should be thought of in similar terms to opera, which arose in the 17th century as a multimedia synthesis of various art forms. Opera, which just means “work,” was at the time the ultimate mixed-media art form. Today, that title has to go to video games. They are a synthesis of media—music, images, story-telling, video—with the added elements of interactivity and procedural rhetoric. Video games are the ultimate opera, and at their best, arguably the apex of cultural and artistic achievement.

Graphics will continue to improve, of course, until we eventually get photorealistic rendering of procedurally generated content in realtime. That’s super cool, but less interesting to me from a conceptual point of view. I’m more interested in the ways that advances in artificial intelligence will be incorporated into games.

One area which remains to be explored, because the technology is not quite there yet, is the integration of natural language systems within games. This is just around the corner, though. Something like Google’s Universal Sentence Encoder could be used as part of the fitness function of a genetic algorithm to procedurally generate meaningful dialogue with various semantic features, for example. These systems will be janky at first, and developers will need to experiment to effectively integrate new tools with gameplay. But the state of the art is such that, maybe within just a few years, indie-developers could populate their worlds with characters with whom players could carry on meaningful, unscripted conversations. The worlds that developers create, and the characters that live within them, will become increasingly real, to the point where we might have to question whether it is ethical to use them for entertainment (e.g. once they reliably pass some version of the Turing test).

It also leads to a completely novel form of story-telling: how do we go about crafting a story when you don’t tell the characters what to do or what to say? The designer in this case is crafting the characters and setting all the pieces in place, but then letting go of control. It is a very different sort of storytelling, since the storyteller, who is ordinarily in control, is now more accurately ‘worldcrafting’—or maybe this kind of design might gradually change our conception of what it means to “tell” a “story.”

5. How has your writing practice changed during the pandemic?
The pandemic has substantially changed the organizing roles I do through the Toronto Science Fiction and Fantasy Writers group. Back in March, we moved all of our activities online, which has allowed the group to grow. We now have over 700 members and we hold 4+ meetings a week, which include beta-feedback meetings, writing sprint sessions, social and networking events, craft workshops, table reads, and other occasional special events, like our annual one-shot anthology event, where we write and edit an entire anthology in under 24 hours (the last title in this series was Outsiders). Most of our members are still in Toronto and nearby areas, but we now have members from as far as Hawaii and France. It’s been great to see the growth of this community, with everyone encouraging and supporting each other in their development as writers. Probably my own writing output has decreased, but it’s worth it just to be able to be a part of this awesome community.

6. Please share any projects, links etc., that you would like our readers to know about.
Everyone should definitely check out Speculative North magazine. All of our back issues are a free download in PDF digital magazine format. Every issue has 30,000+ words of fiction, including at least one story in each of the genres of science fiction, fantasy, and horror; at least one first-time published author; and at least three stories by authors who identify as writing from a marginalized perspective or identity. The magazine is dedicated to the celebration, promotion, and enjoyment of speculative literature in its various forms. Our mission is to foster a community of diverse voices in speculative literature and to promote the growth and flourishing of the speculative literature community. For anyone who wants to support us, the absolute best way is to download a free issue!

Buy the House of Zolo’s Journal of Speculative Literature, Volume 2