The Launch of JE Solo’s Phreak 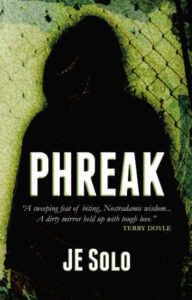 Toronto, ON, CD, July 27, 2020 — The House of Zolo is  thrilled to announce the long-awaited launch of JE Solo‘s debut novel — Phreak.

“A poignant and captivating snapshot of our not-so-distant future. Beautiful in its devastation, a whimsical story of injustice, hope, and the fight for connection in a disconnected world.”
(Tracey Waddleton, Send More Tourists, The Last Ones Were Delicious)

“An urgent and evocative novel… a call to resistance. The world in this book is imagined but shockingly familiar. St. John’s and Newfoundland are like a second protagonist, with a voice and character that shine through the pages.”
Susie Taylor, author of Even Weirder Than Before)

In an alternate, near-future world where corrupt government and corporate interests rule the smallest details of Island life, an unusually sensitive child is born. Navigating a landscape of ecological devastation and botched genetic modification experiments, the child’s survival depends upon their heightened senses and the skills they learn at the knee of their life-hacking father. Will it be enough? As they cross the threshold of adulthood the collapse of Island society draws close and they must act in order to protect what they love.

Told in a series of vignettes, with a haunting filmic quality and powerful imagery, Phreak is a richly detailed and compelling first novel. Solo deftly layers satire and social commentary to create a powerful story of resilience and survival. 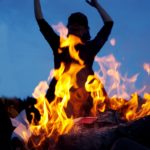 JE Solo is an award-winning writer, multi-disciplinary performance and media artist, and musician. JE is the recipient of the Media Arts Prize and the Dramatic Script Prize from the NL Arts and Letters Awards; the Linda Joy Award from the Atlantic Film Festival; and the East Coast Music Association’s Stompin’ Tom Connors Award. JE’s work has been published by Perro Verlag, Truck, Playwrights of Canada Press, Write On Journal, Newfoundland Quarterly, TOFU Magazine, Canadian Theatre Review, and Switch Magazine. Phreak is JE’s first novel and was short-listed for the Writer’s Alliance of Newfoundland and Labrador’s 2017 Fresh Fish Award. http://jesolo.ca/